Client case study: Warren Otter author of Crank it UP 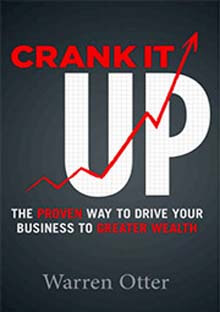 Warren Otter was a first-time author who came to Grammar Factory for a structural edit of his book Crank It UP.

Crank It UP is targeted at business owners who have successfully grown their businesses through the start-up phase and then through several years of strong growth only to start slowing down as they reach maturity. Through the power of mergers and acquisitions, Crank it UP teaches these businesses how they can maintain growth into maturity and beyond.

Warren had previously considered the concept of writing eBooks to become known as a published expert in his field. While he was keen to write something of substance to document his ideas and assist in educating small- and medium-sized business owners, but the idea of an eBook never did it for him – it didn’t seem real. He felt his target market would take a physical book more seriously than an eBook.

As a first-time author, “the writing process for me did not come naturally or easily.” Warren felt he needed the structure and support of a writing coach, and participated in a group program led by Andrew Griffiths (Australia’s leading small business author), who challenged him to write 30,000 words in 30 days. While finding the time was difficult at first, it became easier a week into the writing process as he created the discipline of going to his study and writing every night. 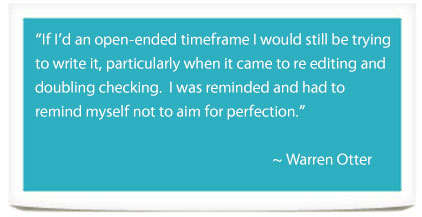 When Warren’s book came to me, his style was excellent – personable and engaging, he was successfully able to explain the ins and outs of mergers and acquisitions to someone with no experience in the field (read: me).

However, his book had very little structure, and this meant that the effectiveness of his style was lost. While individual passages read well and were engaging, it was difficult to figure out where they sat in the overall framework of his book. Additionally, because there wasn’t much structure, this meant the same concepts came up in different areas, meaning there was a lot of content that needed to be cut and consolidated (about 7,000 words altogether).

The main focus of the editing was clearly making the case for how an acquisition can help a company maintain (or restart) growth, rather than sliding into maturity. Then, once we’d made a compelling case, we could go into the high-level process that a small- to medium-sized business owner should follow for a successful merger.

“Jacqui was able to take my brief and understand what I was trying to put together and bought it into shape, at the same time largely kept my style in tack. I was shocked when 7000 words came out of my initial manuscript and chapters had moved around, but it all made sense and gave it great value.

In the future I would involve my editor at the planning stage, again for the first edit, and once I reworked the book based on the editor’s review I would go back again at least one final time.”

Since Warren published his book in early 2014, he has found that his target audience actually understands what he delivers, which has given him far more credibility and reach.

He has engaged with CPA Australia, who is looking at involving him in their discussion groups with the CPA member base, and business has picked up with more referrals coming in. As someone with a specialised niche, people are now engaging him for the work he wants to assist them with, rather than just as a generalist professional adviser. 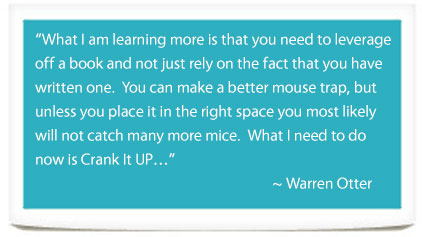