Commas correctly used: 5 compulsory commas you need to know about

Commas correctly used: 5 compulsory commas you need to know about 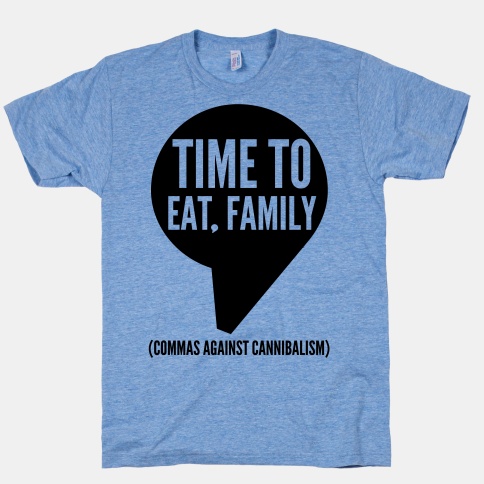 The humble comma is the smallest, lightest, briefest of pauses available in English grammar. It’s the baby of the punctuation marks. But babies, commas often find themselves in the wrong place at the wrong time. The chief function of a comma is to indicate where we should pause when reading a sentence. This pause is very important, and can change the meaning of a sentence.

Commas were once used with abandon, and had us pausing for breath so often we’d be in danger of hyperventilating. Today, however, the comma is in danger of extinction, and is more often seen in the form of a Bluetooth device hanging from the ears of Upwardly Mobile Professionals. But while its use is often discretionary, there are times when a comma is still compulsory.

Compulsory commas no. 1: in lists

Most of us know that we need to put commas between the elements in a list.

This is probably the most straightforward and well-understood comma placement. An un-comma-ed list is a rare beast. However, a problem can arise when we get to Blitzen. If you look up Santa’s reindeer on Wikipedia, you will find a comma before Blitzen. When I was at school I had my wrist slapped with a ruler if I dared put a comma there. But if I’d gone to school in America, this wouldn’t have happened; it’s standard practice there to put a comma before the final element in a list. So is it right or wrong?

The comma placed before the final element in a list is known as the ‘Oxford comma’, or a ‘serial comma’. And while it’s not wrong, neither is it compulsory.  However, there are times when it’s a good idea – this is when the elements in a list are not single words but phrasesor when there is the potential for ambiguity. For example:

A good grammarian knows what to do with their commas, apostrophes, colons and semi-colons, and all the other weird and wonderful squiggles that make up English punctuation.

You’ll see that ‘colons and semi-colons’ are holding hands in a nice cosy way that makes them a single item, and the comma that comes after them helps keep the very last item separate. When you read it and pause where the commas ask you to pause, it sounds nice and natural.  So if you read a list and it sounds clunky or confusing, don’t be afraid to pop in an extra comma.

Compulsory commas no. 2: around phrases

Sometimes two commas are better than one, as in the case of the parenthetical phrase.  A parenthetical phrase is simply a phrase that can be enclosed in parentheses (brackets to some) without turning the sentence into nonsense. This one is actually really easy. To make sure your commas are in the right place, pretend that the words between them are not there and read the sentence again. Does it still make sense? If the answer is yes, give yourself a gold star for correct comma placement. If you have created nonsense, alter the position of the offending comma. This example is wrong:

I tried to put the comma where I thought it should go, and because I read a blog about commas at Grammar Factory, I got it right!

If you take the words between the commas out, you have:

I tried to put the comma where I thought it should go I got it right!

The correct comma placement is:

I tried to put the comma where I thought it should go and, because I read a blog about commas at Grammar Factory, I got it right!

Because, without the words between the commas, you get:

I tried to put the comma where I thought it should go and I got it right!

This particular mistake is very common, because we naturally tend to pause before the word and, especially when reading aloud.

Closely related to the parenthetical phrase is the non-defining or non-restrictive phrase, which also needs a comma. A non-defining phrase provides information that is incidental or unnecessary.

Getting it wrong can change the meaning. Consider the following:

My mother, June, was named after the month of her birth.

My mother June was named after the month of her birth.

The first is correct, the second sounds like I have more than one mother (as in, only one of my many mothers was named June).

Compulsory commas no. 3: however as a sentence connector

If you want to use however as a sentence connector, you have to put a comma after it. If you don’t, you turn it into an adverb. For example:

I decided to write a blog post about commas. However, I opened a can of worms.

If you take the comma out, you make however an adverb:

I decided to write a blog post about commas. However I opened a can of worms.

This sentence describes the way in which I opened a can of worms. Which I would never do, because I find them comprehensively disgusting. Here’s another example of however used as an adverb:

However hard I tried, I just couldn’t resist that second piece of chocolate cake.

This sentence is about how the chocolate cake was resisted, and the word however is clearly an adverb. Not sure if a word is an adverb? Try replacing it with the phrase, ‘In whatever way’.

Compulsory commas no. 4: after introductory phrases

To prevent it from being ambiguous, you need a comma after an introductory adverbial clause of condition. Huh? That is, after introductory phrases that begin with the words as, since and while that are about changing conditions.

As it began to rain, we decided to abandon the picnic

The rain caused the abandonment of the picnic. Nobody likes sitting on soggy grass eating soggy sandwiches. We need a comma here.

But in this next example, the change in conditions doesn’t actually cause what happens in the rest of the sentence.

As it began to rain I finished writing my blog post.

I didn’t decide to finish my blog post because it was raining. It just happened to start raining as typed the final full stop. So, no comma.

Closely related to this is the introductory adjectival phrase, or, in other words, a descriptive introductory phrase, which also needs a comma after it.  For example:

Tall, blonde and beautiful, she attracted several wolf whistles as she strolled along the beach.

Compulsory commas no. 5: before names and titles

I’ve saved the easiest for last. When you address somebody, you have to put a comma before their name or title.

‘How do you do, Your Royal Highness?’

‘What do you think you’re doing, Comma? You have no business lounging around before my last item.’

So now that you feel confident using commas, keep an eye out for our next post in the Punctuation 101 series, in which we solve the riddle of the hyphen versus the dash.