Do you read self-published books differently? Proof of why getting it done right is so important 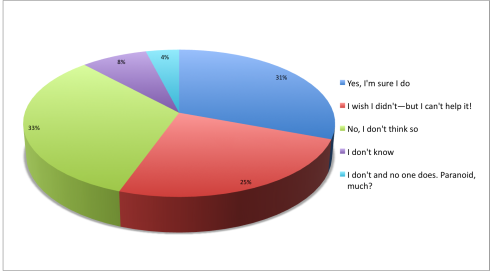 I was a ‘yes’ – whether I want to or not, I’ll always hold self-published books to a higher standard. When I read a book that I know has been self-published, I scour it for proof. I critically appraise the front cover, back cover and spine. I look at how narrow the margins are, how well-spaced the text is and the visual appeal of headers and footers. And, as an editor, I pounce on every typo and grammatical error (especially if this person approached me about editing, and then chose to go with someone else).

And the verdict’s in – it’s not just me – according to Catherine’s survey, over half of us read self-published books differently.

This makes it even more important to ensure we, as self-publishing writers, self-publish the right way, by working with professional editors, hiring skilled cover designers and typesetters, and splashing out on top-quality printing.

Read on for the survey results from Catherine:

Do you read self-published books differently? Yes, you do!

A while back I asked you if you thought that you read self-published books differently, and it occurred to me today that I never shared the results. So here they are:

Keeping in mind that this is in no way scientific and is only a small fraction of the people who read the post, let alone a microscopic dot in the world of people who read self-published books, the feedback was that:

What’s more interesting though are the potential explanations for why readers might have a different experience with self-published books that people came up with in the comments.

A few commenters said that when they read a self-published book and spot an error, they know something can be done about it: they can contact the self-published author, who is probably easily located online, and let them know. Then the error can be removed and future editions will be free of it.

I have to say this horrifies me a bit, because while typos are cut and dried, it comes back to the main point of the original post which is why do you assume it’s a mistake? As an Irish author writing in British English (and I know I’m always on about this but it’s a problem that self-publishing created and a major point of bother for me), I get e-mails from people correcting not my mistakes, but British English into US English, among other things. Even on Robert Doran’spost about copy-editing recently, we had this: 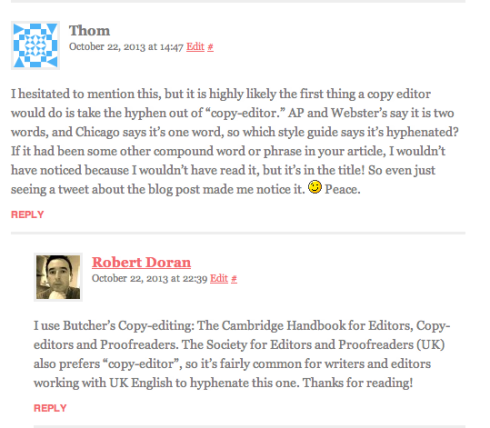 And I have never, in my entire reading life, picked up a book I bought and said to myself gleefully, ‘Time to play editor!’ I’m there for the story. But then, of course, if something is riddled with errors, you won’t even get that far…

I do wonder how a self-published author could ever write an experimental novel, or one that plays with language like, say, Everything Is Illuminated. If that novel was self-published, would Jonathan Safran Foer get e-mails complaining about Alex and his broken, thesaurus-powered English?

Another point raised was the perception (or misperception) that self-published books aren’t ‘finished’. This may not be a conscious thought, but I can see how readers would, somewhere in the back of their mind, greet a self-published book as a work in progress. Hence, reviews that talk about the gap between what the book was and what the book could be if only the author would listen to the reviewer’s suggestions.

I think the most important issue raised, though, was that of trust. In a few weeks’ time when I open The Gods of Guilt on my 12th Annual Drop Everything and Read Michael Connelly’s New Novel In One Sitting Day, I’ll dive right in, safe in the knowledge that Connelly knows what he’s doing, and so did everyone else who was involved in the book. But self-published authors don’t always instill that ‘safe’ feeling in readers, and maybe we haven’t earned that right yet.

What I’d really like to know, and what I can’t imagine there’s a way to find out, is what percentage of all readers regularly read self-published books. That’s a figure I’d like to get my hands on.

In the meantime, what can we do? There’s only one answer: our best. Keep striving to produce the best and most professionally polished books we can.

Trust is earned, after all.